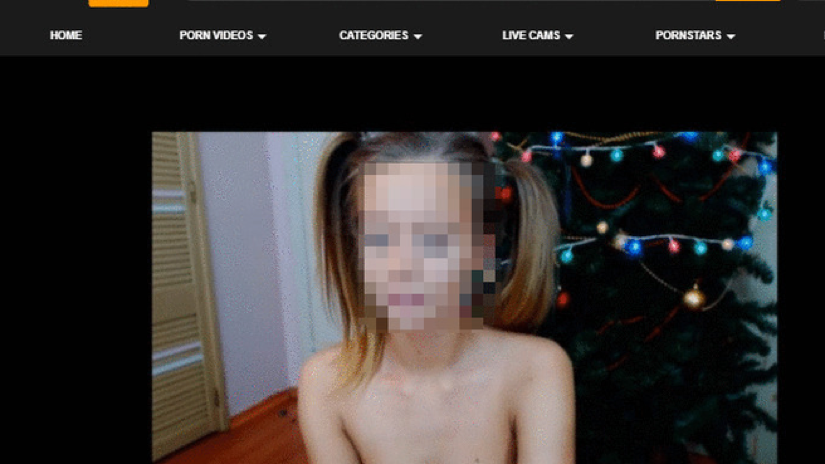 In my previous blog posts, I mostly focused on how online campaigns were related to the senses (smell, space awareness, taste and hearing).

The posts dealt with victim-blaming, street harassment and human rights violations – from the viral videos of women being harassed, to campaigns against predatory drugging that inevitably put the burden on the victims, to the role of feminist songs in driving a new wave of feminism from the Global South, and how smell was an illustration of the degradation of living conditions in Europe’s most infamous refugee camp. In each case, activists were trying to make a difference online and new media was used mostly as a source of awareness-raising, although with mixed results.

Pornography relies on the sense that is most likely to deceived us – sight. In the era of fake news and deepfakes, the mere act of seeing something happening is no longer reliable empirical evidence. 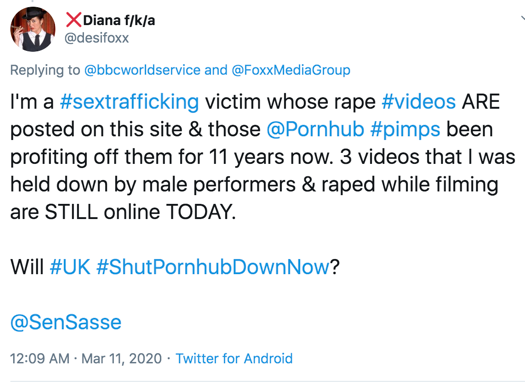 But videos of seemingly happy and cheerful women are also deceiving. For any victim of trafficking, particularly trafficking for sexual exploitation, is taught how to act as if she likes it. If she is really incapable of doing so, drugs and alcohol will soften the blow.

In other cases, the victims did not even give their consent either for the sex or for the filming. A 15-year-old trafficking victim, for example, who was trafficked and abused for almost a decade by her father, was unable to remove the videos of her from the platform.  Another victim, Rose Kalemba, struggled to remove videos of her rape at 14-years-old. She found out a few months after her attack that videos of her were circulating online, through links that her classmates were sharing on MySpace. Kalemba stated to the BBC:

“The worst videos were the ones where I was passed out. Seeing myself being attacked where I wasn’t even conscious was the worst.” 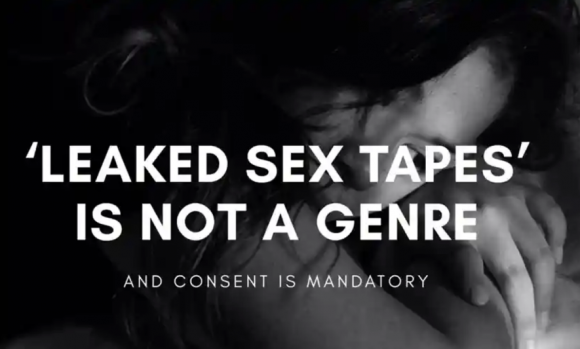 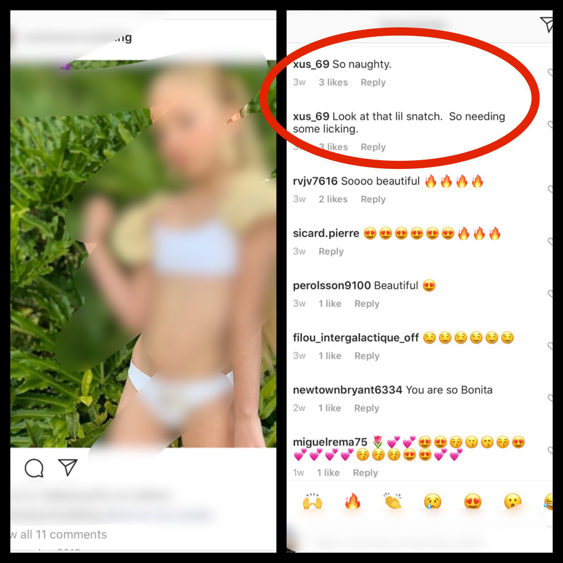 As of March 2020, Collective Shout is running the campaign #WakeUpInstagram to call attention to the predators roaming free in the platform, looking for pictures of young girls. The comments are shocking enough, but the real problems are the grooming of these girls for trafficking and exploitation.

According to a research conducted by the University of Southern California, there are patterns in the way the Internet is used by sex traffickers:

So not only do traffickers and abusers use social media to recruit girls, these popular platforms are often where they are often sold and advertised later on. This poses a risk for all minors, but this type of grooming is especially dangerous when it targets girls from vulnerable backgrounds, and in particular those in institutions or foster homes:

“The guy was reaching out to a lot of girls all day long. One girl, who is actually in a youth home, she had access to the Internet, and he connects with her on a social media platform. He drives all the way up from Columbus to Toledo, picks her up at her foster home and drives her back down to Columbus, and then traffics her here in Columbus. You know, 20, 30 years ago he would have never been able to connect with her, but because of social media, that connection was immediately made in over a few hours. He found out where she was and she told him, ‘Yeah, please come get me. I want out of here.'” (University of Toledo, 2018).

The impunity of new media pimps

Violence against women and girls is not a new phenomenon, but the internet has managed to intensify it and perpetrators enjoy almost seamless impunity: “Online is an environment where the social norms that justify and perpetuate GBV, normalizing it as an everyday aspect of gender relations, are alive and flourishing. Dhanaraj Thakur highlights some aspects of the online environment which are argued to increase the likelihood that individuals perpetrate violence and abuse: the chance of anonymity, the fact that online exchanges are electronic and occur at a distance, meaning empathy can be reduced; and the speed at which images and messages can be sent.” (O’Donnell, A. & Sweetman, 2018).

Image-based sexual abuse thrives in the online environment. The problem is that it is tremendously difficult to pin down the perpetrators, especially because the context of such abuse ranges from intimate partner violence to pedophilia to human trafficking for sexual exploitation to torture – or all of the above.

It is a difficult question to answer, but it is absolutely crucial for campaigners and activists because advocacy strategies can vary tremendously depending on who you are trying to hold accountable.

Pornography has become so ubiquitous in modern societies that it is incredibly challenging to criticize the consumers and suggest part of the blame for the abuse lies with them. Even when minors are involved, if the girls are “mature enough” – meaning, their body is developed enough – they become a forbidden fetish tolerated by the internet. Online communities devoted to this sort of sexual attraction shield individuals from shame, as in the case of the members of the infamous Jailbait subreddit: “Because of their public participation in a community on one of the most important sites on the internet, these men felt protected from the scorn and delegitimization they would receive from the larger world.” (Tufekci, 2017).

Even when campaigns try to steer away from criticizing individual consumers and focus instead on the platforms harboring the videos, the consumers are still siding with the corporations and some feel personally      attacked. In response to the #TraffickingHub campaign, for example, some Twitter users wrote several variations of:

Profit is certainly one of the reasons why platforms might be discouraged from sharpening their technology to exclude. But this kind of content exclusion can also expose platforms to plenty of criticism, mainly from activists. In fact, almost any attempt to “civilize” the internet will inevitably backfire, as “policies and user agreements of social media platforms, including those of Facebook, YouTube, and Twitter, have resulted in the banning of activist users, the removal of activist content and accounts, and the handing over of sensitive activist user information to governments” (Poell & van Dijk, 2017).

Hackers to the rescue? 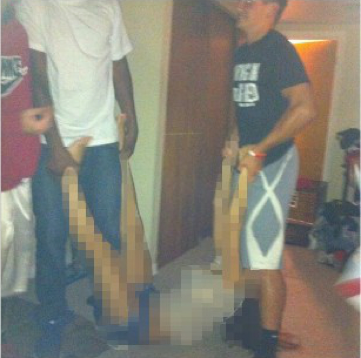 Online activism is not limited to popular hashtags and engaging graphics. Hacking is not a form of activism or advocacy endorsed by respectable nonprofits – but it is effective even if hackers’ activities are not known or widely shared (with a few notable exceptions).

Hacker group Anonymous started the movement #JusticeforJane after a teen was sexually assaulted by two members of the local football team. They brought the crime which took place in Steubenville, Ohio, to national attention in the United States by hacking key documents regarding the investigation. The most jarring of which was probably the on-camera confession of one of the perpetrators as a joke.

Hackers involvement in the protection and demand of justice for victims raise innumerous ethical problems. But from the perspective of those who feel helpless against image-based sexual abuse, their contribution is viewed as essential.

Although it is expected many of these online campaigns will have limited impact and do not stand a chance against giants of the industry, they raise questions about victim blaming for image-based sexual abuse, the disregard of authorities and companies when it comes to sexual exploitation and the normalization of the commodification of women’s bodies online.

They are also another illustration of just how much power these kinds of internet platforms hold over our lives, how even the most egregious abuses can be used to make a profit, as well as the ambiguous potential new media represents for women’s rights.

This exercise was a fantastic experience to know more about disability rights and functional diversity. By managing Twitter I also learned a lot and I had the chance to engage with other activists working on the topic.

Trying to write blog posts about the senses was a bit challenging and it really made me think about our overreliance on sight and hearing, specially in the case of new media activism.

However, it also made me realize the importance of sensory experiences and embodied activism. I could not forget how my own experiences with the senses compelled to become an activist in the first place – e.g. when I first entered the dozens of refugee housing centers I worked in, the smell was always a giveaway of the living conditions and, in a way, refugees’ hope or despair at their situation. In housing centers where refugees stayed for a few weeks before being moved to an apartment and being integrated into mainstream society, the smell was fine – but in housing centers in which refugees were dumped for years, it took some getting used to.

Similarly, it was street harassment which first made me realize my place in society as a woman and ever since I was first catcalled I have been very aware of how much space I take when I walk in the streets and all of my surroundings.

And after someone close to me was drugged through a spiked drink, taste became yet another sense which had to be particularly activated during nights out, although I always worried about the victim-blaming aspect and disliked self-protection campaigns and gadgets for that reason.

Finally, I was very inspired by the fourth wave of Spanish-speaking feminism and having participated in many protests with similar groups, I can attest the feminist chants are highly effective and inspiring.

I tried to avoid sight as much as I could as a writing topic because I wanted to challenge myself. But eventually I could not ignore the role of sight and imaged-based sexual abuse. As someone who has been working for a while on sexual exploitation, I am acutely aware of how images and videos can make or break a person’s life and how they normalize violence against women and girls. However, this experience made me realize how we activists who use new media are dependent on hearing and sight – to the detriment of the participation of people with hearing or visual disabilities – and how we must seize on new platforms to change the narrative.

Phillips, C. and Edenbrow, J., 2020. Anonymous Comes To Town: The Hackers Who Took On High School Sexual Assault In Ohio – Documentary. the Guardian. Retrieved from: https://www.theguardian.com/news/ng-interactive/2019/apr/18/anonymous-comes-to-town-how-hackers-took-on-high-school-sexual-assault-in-ohio.

Margarida is a feminist activist working with both grassroots feminist groups and established women’s organizations in Portugal and Europe. With a background in Cinema, Philosophy and Human Rights, she is particularly interested in ending sexual exploitation of women and girls in all its forms and seizing upon innovative and gender sensitive ways of communication to do so. View all posts by Margarida Costa Da Silva Catela Teixeira

2 thoughts on “Can campaigners put an end to online image-based sexual abuse?”