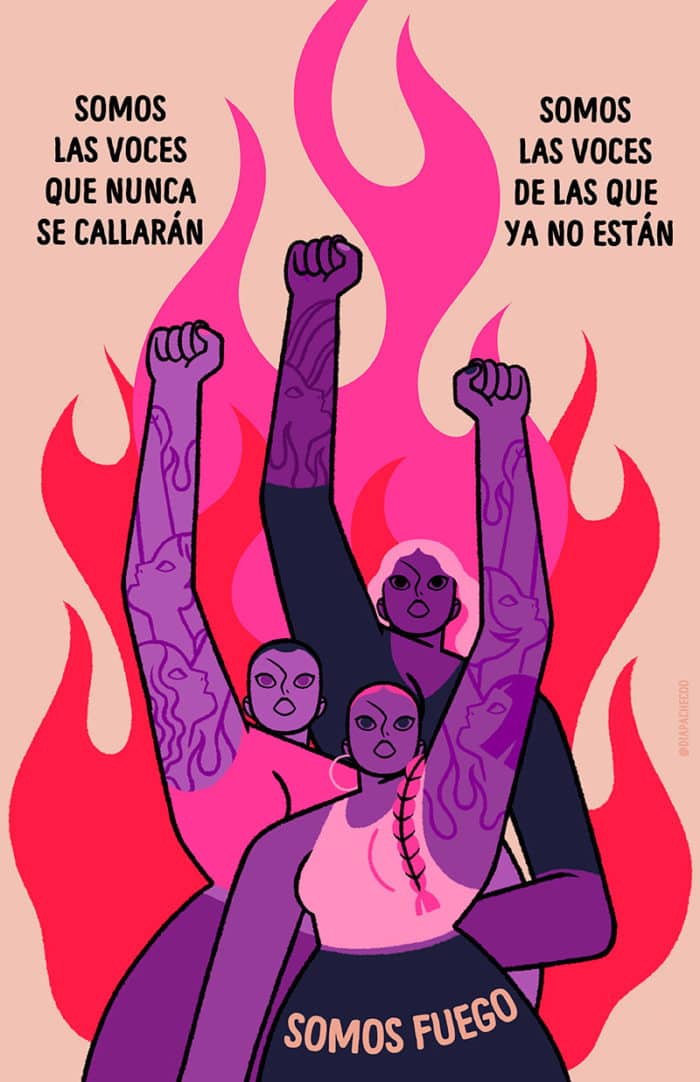 Today is the International Women’s Day, but to highlight this day, I will be writing about what happens tomorrow.
On monday the 9th of March, there will be a national strike throughout Mexico. Women all over the country are staying at home to demonstrate how things would be like without them. The reason for this strike is the country’s extremely high number of femicides (the killing of a women or a girl by a man and on account of their gender). Interesting initiatives have also been taken online. This strike will be executed throughout social media as well, but maybe not in the way you’re thinking.

Only in 2019, Mexican authorities registered 976 reports on femicide of both women and girls. The real number is most likely to be much higher, keeping in mind that many cases go unreported or are categorized differently, for example as homicides (not taking the gender of the person murdered into account). This still ranks Mexico as one of the countries with the highest number of femicides in the world. The Mexican government has failed in their response to this horrible issue, not taking it seriously enough to actually take action. This has lead to massive protests against gender violence all over the country; the civil society and human rights defenders are holding the government responsible for not addressing these killings. They sued the government in the Inter-American human rights system, which found that the Mexican government had an obligation not only to improve its investigation into crimes involving violence against women, but to take proactive steps to prevent such violence (LA Times).

One of the Mexican human rights defenders and feminists, Maria Salguero, created an interactive map of femicides in 2016. She started the project of mapping out and documenting all the femicides in the country, including date, the names of the victims and information concerning the different cases. The map is to this day operative, still collecting data and adding the information available of women that had their lives taken for being women. The image of crosses symbolizing the murdered women completely covering the map and multiplying the closer you zoom in, is hard to forget. Maria says in an interview with EL País; that the two resent most discussed cases in the media; the femicides of Fátima Aldrgihett (7 years old) and Ingrid Escamilla (25 years old), are proof of the processes of impunity in the investigation of these murders. “Depending on the administration, several femicides are erased at a stroke,” says the activist. In recent days, the Attorney General of the Republic, Alejandro Gertz Manero, proposed modifying the criminalization of the crime of feminicide to adressing the femicides as homicides. “The prosecutor does not understand that it is a very serious situation and that the recommendations of the Cedaw [of the United Nations] have to be applied,” she says.

The national strike will be executed online

So what is the point of carrying out a strike? To put the spotlight on the tsunami of femicides and gender violence and to demand solutions is of course one of them, but there is more to it than that. It is about creating a crack in a system that is ultimately killing women, to make visible structures that oppress and that are covered up. It is a way of creating solidarity between women of different backgrounds and classes and to confront the stereotypical ideas of how a woman should be, act and think. Women’s invaluable contribution to society will also become very clear to both individuals and all sectors of the country; be it social, business, governmental or any other. Imagine the void of not having more than half the country’s population in the streets, the shops, the restaurants, schools, hospitals or police offices to mention a few; that’s what the strike is trying to make visible.

Tomorrow, the national strike starts and many from other parts of the world wonder how they can participate and show solidarity with the women striking. Here’s a solution: Don’t log into your social media! Spend a whole day without checking in on your accounts. The feminist and women’s movements have decided to boycott social media, since this is “one of the most lucrative extractive businesses in the world”. On the poster shared all over through different activist networks it says: “Every click, every word, every image we generate, translates into money: let’s stop an unpaid job in which we participate daily.” “Let’s stop extracting our lives for one day, our total absence in the social media represents concrete economic losses.” If you read our posts on Social Media and Big Data, you now know that data is the new gold that all the cooperations are mining for. It is also an interesting topic to look at from a feminist perspective, to address the unpaid labor that often is related to gender issues (child care and domestic work for example). This virtual strike also works as an alternative for the women that for different work related reasons are not able to join the strike “IRL”.

So if you want to show your support to the women striking on the 9th om March and take a stand against femicides and gender violence, here is what you do; post #9M today, stating your solidarity with the movement and that you won’t even make one click on the 9th. Not on Facebook,Twitter, Instagram, Tic Toc, Spotify, Netflix, Google, Youtube or any other platform.

Not one less! #NiUnaMenos