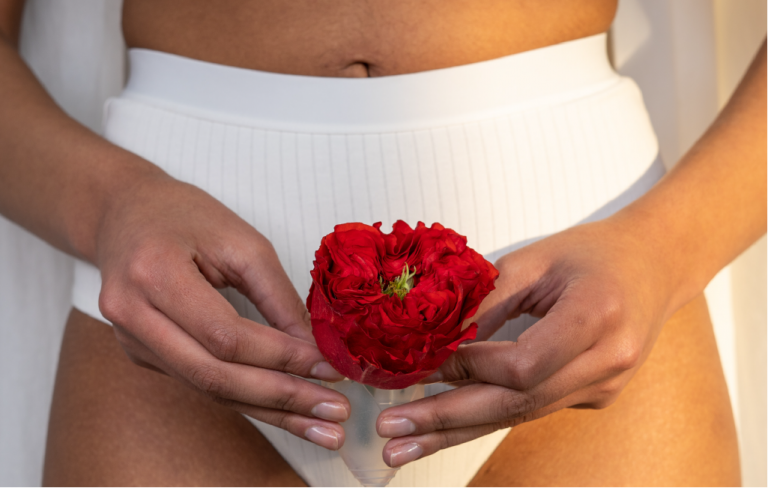 For those passionate about gender equality, period poverty and unfamiliar with Nadya Okamoto – brace yourselves. This 22-year-old Harvard student and social entrepreneur from the United States is worth following on various Social Media platforms: Facebook, Twitter, Instagram and LinkedIn. Her devotion for menstrual justice is inspiring, and she might inspire you to become a period warrior as well!

Back when she was 16, Nadya established a non-profit called PERIOD. It is working is to provide menstrual assistance for those experiencing poverty, for the homeless all around the world; and to provide education resources on all things menstruation, to fight menstruation stigma, and to achieve gender justice.

In 2018 Nadya published her groundbreaking book “Period Power: A Manifesto for the Menstrual Movement” (2018), where she enlightened her readers about various injustices and inconveniences that menstruators are subject to – from the United States and beyond.

Menstrual hygiene is a prevalent issue in the entire world – just as in the so-called “developing countries”, where the number one reason for girls falling out of school is nothing else but menstruation; it is also an issue in the “developed” world as well.

You can learn more about Nadya by watching her TED talk “A Period Positive World” here:

Many countries to this day are imposing high taxes on these vital products that half of the population uses each month for the majority of their lives – this is the case as in Europe, as in the United States and beyond.

As a consequence of Nadya’s efforts, several states in the United States of America have removed the “tampon tax” – the VAT for various menstruation management products – including tampons, sanitary pads, menstruation cups and alike.

It is unbelievable, that men’s “essential” products, such as Viagra – for erectile dysfunction, and Rogaine – for baldness – aren’t considered as “luxury items”, but menstruation products are.

Nadya has succeeded in contributing for successful elimination of “tampon tax” in several states in the US, but there is still a long road ahead. Same as in Europe, where most of the countries are still taxing menstrual products with high rate – perhaps, excluding Germany; while the United Kingdom after Brexit is proposing to completely remove the tax, following Scotland’s example.

Recently, Nadya and PERIOD.org launched a Social Media campaign to provide menstruation management products for public spaces in the United States, where they lack free products. Having the argument that pads and tampons should be as free as the toilet paper, the campaign focuses on men being forced to pay for the toilet paper, just as women are – for menstruation products.

See why we made men pay for toilet paper in public restrooms on March 8th. #FreeThePeriod #iwd2020 @periodmovement

Glamour Magazine, among many other womens’ magazines, praised this initiative:

They have partnered with the creative agency Huge to create a money-operated toilet-roll dispenser, which they put in men’s cubicles and made a hilarious vital video. It highlights just now mad it is that women have to pay for such an essential product. Imagine having to pay for loo roll? Now you don’t have to…

Additionally, recently Nadya created the campaign #FreeThePeriod and called her SoMe followers (LinkedIn, Twitter, Facebook, Instagram) and PERIOD movement as well (Instagram, Twitter, Facebook) to take a selfie in the free menstruation product lacking bathroom and tagging the location, so that it could attract attention and provoke some much-needed empathy and compassion from those who don’t experience this blessing on a monthly basis for the largest part of their lives. 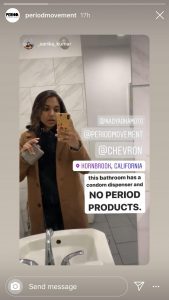 As a consequence, some companies tagged in such photos responded that they will provide free menstruation management products in their bathrooms, because of this campaign.

This campaign, and overall Nadya’s and PERIOD’s efforts serve as a great Communication for Development example, since it engages civil society for positive social change. This time – with the help of Social Media.

Would you join Nadya’s battle for menstrual justice?