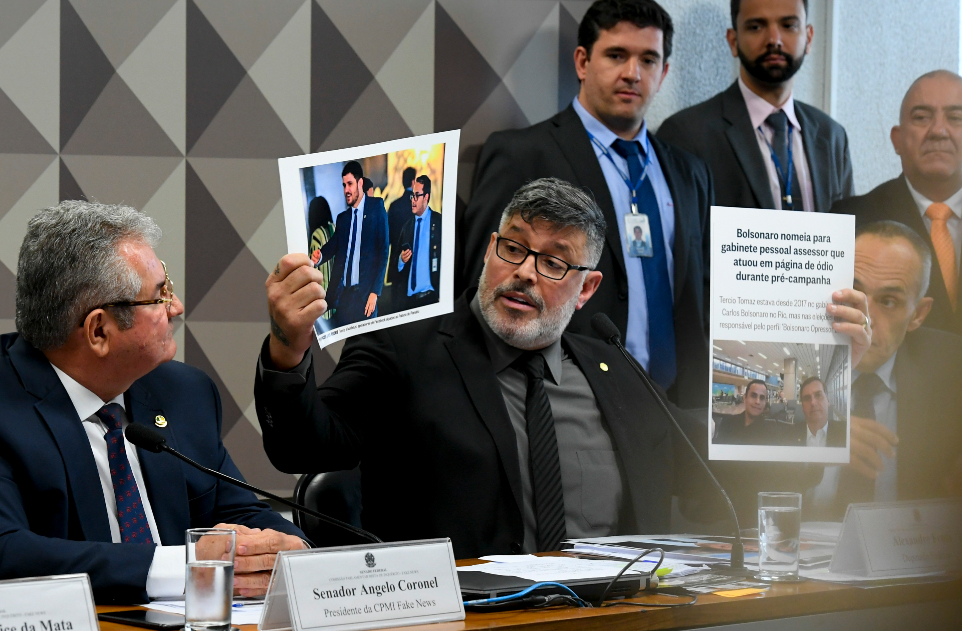 A week prior to the final vote on the 2018 Presidential Election in Brazil, an illegal scheme to disseminate “hundreds of million” of WhatsApp messages in favour of Jair Bolsonaro was being prepared. This accusation was the headline of Folha de S. Paulo, the most important newspaper in Brazil in October, 18 of that year (click here for a report in English). No relevant measures were undertaken by electoral authorities to investigate the matter and Bolsonaro was elected president.

That was the tipping point of a campaign tainted by a general sense that, while disinformation and hate speech might have been decisive in the landslide favouring Bolsonaro in the final days of the campaign, we would never know what really happened – or what to do to prevent it from happening again. And it has been happening over and over again, from false claims that NGOs set fire on the Amazon forest to attacks against the press and other democratic institutions, always backed up by an aggressive and coordinated social media militancy.

According to the Brazilian Constitution, Parliamentary Inquiries must have a specific subject of analysis. How specific do you think an investigation on fake news, democracy, elections, cyberbullying and attacks against human dignity and personal data protection is? Well, not very much so I would say. That is the formal scope of the Parliamentary Inquiry Commission on Fake News (from now on, CPMI) created by the National Congress in September, 2019. Yet everyone knows that its real challenge is much more clear: to prove what has really happened in the 2018 elections and whether the federal government is behind a series of disinformation / hate speech episodes favouring president Bolsonaro since then.

The five-month investigation has held 23 public hearings and gathered over a hundred documents so far, achieving mixed results.

On the one hand, the polarized environment of some of the most important audiences has led to exchanges of accusations and insults, the worst being – ironically – a fake accusation against Patrícia Campos Mello, the journalist who wrote the original story on the illegal use of Whatsapp to disseminate disinformation favouring Bolsonaro’s 2018 campaign. The false claim that the reporter had offered sex to a source in exchange for information was followed by coordinated attacks against her by the president himself and his online supporters. Former allies of president Bolsonaro have denounced that there is a “digital militia” formed by parliamentary assistants and government officials connected to the Bolsonaro family (the president and his three sons who are congressmen), but it has been hard to prove.

It should not be. There is mounting suspicion over a number of social media accounts, whose records retention was demanded by the CPMI, including copies of conversations and erased content. However, Facebook and Twitter have denied such measures (DOC 59 and DOC 57 available here), arguing that since the data is property of a US American company, it could only be demanded using the Treaty on Mutual Legal Assistance in Criminal Matters (MALT) between the USA and Brazil. If such a process will be effective remains unclear, since the executive branch of the Brazilian government has no interest in helping the investigations (and given that Bolsonaro is a Trump ally, maybe the US government would not help either), but it demonstrates how hard it is for the Brazilian Congress to access information on companies that are highly incorporated in public debate. In addition, WhatsApp has denied access to data history on groups suspected to disseminate fake news by arguing that the company does not store this information (DOC 58 available here). I wonder what the US Congress would do in a similar scenario involving foreign companies.

On the other hand, few but crucial advances have been made. An image presented to the CPMI in February by a former employee of Yacows, a digital marketing company, shows a series of smartphones disseminating information on Fernando Haddad (the runner-up in 2018 presidential elections). The owner of Yacows recognized that the picture was taken inside the company’s building, although he argued not to be aware of what the content of the messages was.

Moreover, the collaboration of social media companies with the investigations, albeit limited, has finally paid off. In March, 4th, UOL reported that Facebook’s answer to a formal request of the CPMI proves the connection between president Bolsonaro’s son, the federal deputy Eduardo Bolsonaro, to a fake news / hate speech profile, named Bolsofeios. Facebook informed that the e-mail account used to register the page was “eduardo.gabinetesp@gmail.com”. That is the same address used by Eduardo Bolsonaro’s staff to buy flight tickets and to make hotel reservations, according to official data provided by the Brazilian Congress. The conclusion is appalling: fake news and hate speech has been disseminated from inside the Brazilian Parliament, by the president’s son, using public resources to attack fellow congress men and women, the Supreme Court and other democratic institutions. The page Bolsofeios had been listed before in the CPMI as part of a bigger disinformation machine, as shown in the image below (highlighted in yellow).

The CPMI now reaches a decisive moment. More than 90 other hearings have been approved, including representatives of social media giants, but the timeline of 180 days to present its final report ends on April, 13th. The Commission may be postponed for another 180 days’ period which would be essential to unveil the real scope of the use of fake news and hate speech by the government.

Data politics and the contentious politics of data

Besides hinting at the dirty ways of Brazilian politics, the Congressional Inquiry on Fake News is a flagship example of a new form of political struggle: data politics, as defined by Ruppert, Isin & Bigo, which “is concerned with not only political struggles around data collection and its deployments, but how data is generative of new forms of power relations and politics at different and interconnected scales” (p. 2). The authors identify three realms of data politics, namely “worlds”, “subjects” and “rights”.

The three elements are part of the political struggle over the Fake News CPMI in Brazil. Firstly, worlds incite us into thinking on “how material conditions of the Internet are critical infrastructures that are generative of politics and struggles” (p. 4). How has the location of social media infrastructure (in the USA) influenced the prerogatives of the Brazilian Congress during the CPMI? Decisively, since it had its access denied to information that, say, telephone companies based in Brazil would easily provide. Secondly, subjects “are produced through various digital interactions and at the same time their digital traces shape and organize their subjectivities and how they are known and governed”.  The use of the term “digital militia” (in Portuguese, “milícia virtual”) to refer to coordinated fake news / hate speech producers – which would be meaningless, say, two years ago – has been widespread in Brazilian media. Finally, “if the accumulation of data traverses subjects it also constitutes them with claims to certain rights that concern its accumulation”. The CPMI has heard dozens of specialists in digital communication, fact-checking agencies and NGOs that advocate for the information and data rights of Brazilian citizens. Which leads to my final remarks.

Building on the definition of data politics, Beraldo & Milan devised a complementary concept: the contentious politics of data, or “the multiplicity of bottom-up, transformative initiatives interfering with and/or hijacking dominant, top-down processes of datafication, by contesting existing power relations and narratives and/or by re-appropriating data practices and infrastructure for purposes distinct from the intended”. The role played by civil society in the Fake News CPMI is not in the scope of this text, but the authors identify a distinction that is relevant here. They argue that data activism can be “mapped along two analytical dimensions”: “data-as-stakes (that is, as issues/objects of political struggle in their own right) and data-as-repertoires (in other words, as modular tools for political struggle)”. The main result of the Congressional Investigations on Fake News in Brazil may be the recognition of those elements: the relevance of information policies to the functioning of democratic institutions and a deeper understanding of the powers and perils of the use of data in the political struggles. Hopefully we will learn enough until the 2022 presidential elections.

What do you think should be the limits of parliamentary powers in relation to digital crime? Is there a new term to refer to the issue of data politics in your country?