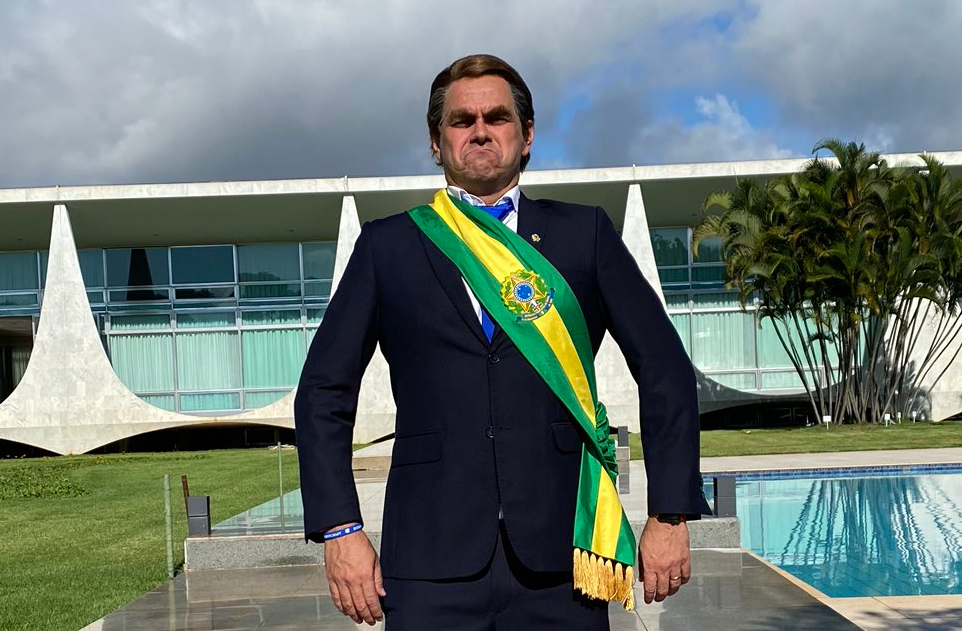 Since Jair Bolsonaro took office, this is what a regular day in the Alvorada Palace – the official residence of the Brazilian president, in Brasília – looks like. Journalists wait outside the gates for president Jair Bolsonaro, behind two fences. Over the first one, their microphones are installed. Between the two fences, security guards organize a space short enough for questions to be heard and long enough for the president to ignore them at will. Behind the second fence, the group of journalists is corralled in open air, waiting as long as necessary for him to ask about the most pressing subject of the day.

On the right side of journalists, there usually is another group of people. But there is no gap between them and the first fence. They are Bolsonaro supporters, waiting to take a selfie with the president and rejoice as he ironizes or simply insults reporters. Their screams and laughter are later the background of news reports on the president’s latest statement, like the sound effects of a 1990’s sitcom.

On March, 4th, 2020, this shameful routine would be taken to a new low. On this day, the breaking news was that official data had just been released on Brazil’s GDP growth in 2019 – only 1.1%. As usual, the official car parked before the gathering. But instead of the president, a comedian got out of it and approached the fence. Dressed in a black suit and wearing the presidential sash, he impersonated Bolsonaro while offering bananas (real ones) to the journalists. As Bolsonaro supporters laughed and the reporters watched the scene incredulously, the president joined the show in amusement. Questions about GDP growth were asked to no avail.

Is this kind of episode familiar to you? Maybe so, especially if you live in the UK, the US or the Philippines. I have come to better understand this behaviour after I read this article, by PUC-Rio’s Philosophy professor Rodrigo Nunes. Based on the work of Whitney Phillips, he argues that the contemporary culture is a fertile terrain for assuming a behaviour typical of online relations, where there is an ethic of limitless humor related to the emotional detachment among people: trolling.

The art of trolling

So let’s focus on this concept for a moment. In a magnificent semiotic analysis of what the art of trolling is, professor Massimo Leone provides elements for us to identify this practice, recognise its power and evaluate its effects. According to him, there are eight characteristics of the typical online trolling scenario:

Two of Massimo Leone’s conclusions are of great concern to the relation between trolling, public discourse and democracy. Firstly, he argues that the most harmful aspect of trolling is that it makes it very hard, and increasingly so, to distinguish between “criticism of mainstream trends and trolling of them”. Secondly, the disruption that trolling causes in the functioning of public deliberation as the realm of peaceful resolution of conflicts, makes it an “intrinsically is a fascist behavior, in the sense that it thrives on the institution and maintenance of a community whose internal cohesion and aesthetics depends on the painful subjugation of a victim”.

In the open political use of trolling rhetoric by political leaders, some of those characteristics may change, like anonymity, but the overall characteristics described above are all there. If you think about it, the public trolling is even worse, since it demonstrates our threshold for aggressive communication practices is higher than ever and certainly it has a feedback loop effect in online discussions, reinforcing traditional forms of trolling.

It is not a coincidence that some of the political leaders known for the use of trolling practices are social media superstars, like Donald Trump and Jair Bolsonaro. It is now widely recognised that this form of disruptive behaviour is fostered by the rise of engagement as a central value of public deliberation, politics, and economics. I have discussed this matter before in the context of fake news. In this sense, it is not a Luddite backlash that will somehow bring back the good old days of mainstream media – not least because in those days many of us thought the solution was to get rid of mainstream media.

A wide range of solutions must be implemented for the quality of our public deliberations to increase. The democratic regulation of the media environments in which trolling takes place is an obvious agenda. It might include algorithmic auditing by public agencies with an independent mandate, like is now common in civil aviation, environmental protection or central banking. Conversely, technology can also help us. For example, this study has proven to be possible to use artificial intelligence informed by linguistic studies to identify troll behaviour and banish it from social media with high accuracy. The enforcement of ethical norms by democratic institutions should certainly play a role there, as well as public awareness.

For now, we can start by a simple step. Stop being NUDGED into laughing and sharing. Do not feed the troll.

When did leaders, institutions and ourselves start to accept this kind of practice as the new normal? Why has that happened now?  Is it a consequence of our overexposure to digital media? What could we do about it?